Gum depigmentation, also known as gum bleaching, is a procedure used in cosmetic dentistry to lighten or remove black spots or patches on the gums caused by melanin. 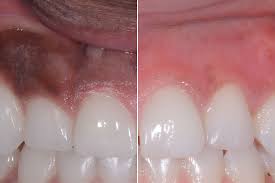 Melanocytes are cells which reside in the basal layer of the gingival epithelium. These cells produce melanin, which are pigments that cause discoloration or dark spots in gums. A dental laser can target and ablate the melanocytes, thus reducing the production of melanin in the gingival tissue. Following laser depigmentation, the gingiva heals by secondary intention. This results in a lighter and more uniform color of the gums.

Your gums also produce melanin. Some people naturally produce more than others, usually people with a darker complexion. Although people often assume that gums are a uniform, pink color, the truth is that there are a variety of shades that peoples’ gums can be.

Your gums might also produce extra pigment in response to an irritation. Cigarette smoke is a common irritant that leads to an increase in melanin production in the gums. The darker color is usually more visible in smokers who have a lighter skin complexion. Known as “smoker’s melanosis,” darkening of the gums that occurs due to tobacco exposure can be reversed by quitting smoking.

Get Fixed Teeth In Three Days At Trisa Dental Solutions

Dial Local Number in your Country

Quick Connect : Know About Our Service

Chat with us @ WhatsApp